India won the second T20 International (T20I) against Australia on Sunday at the Sydney Cricket Ground to take an unbeatable 2-0 lead in the three-match series. India captain Virat Kohli, who played a crucial knock of 40 off 24 deliveries in India’s chase of 195, took to Instagram to share pictures from the match. “Amazing game of cricket. Well done boys,” Kohli captioned the series of pictures. His wife Anushka Sharma, who is currently in India and is pregnant with their first child, reacted to Kohli’s post with a series of heart emojis. 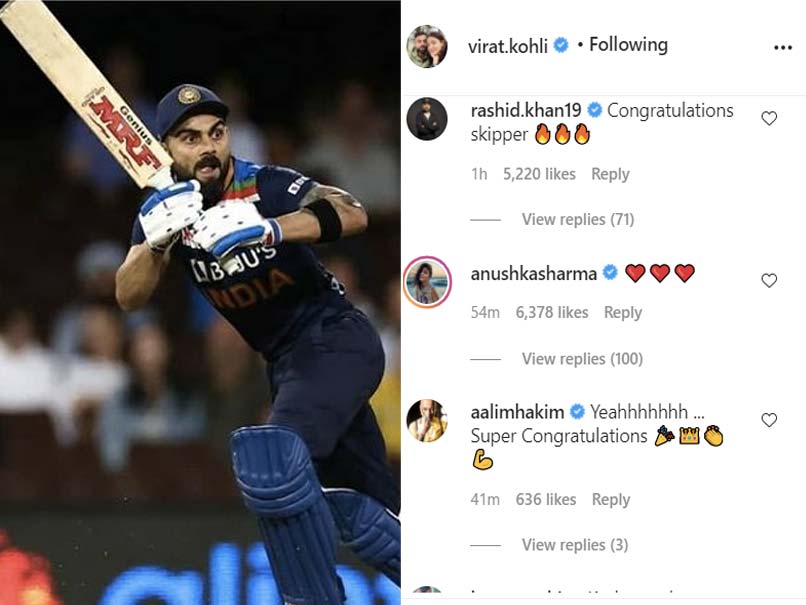 India won the toss and opted to bowl. Stand-in captain Matthew Wade led the way for Australia, smashing 58 off 32 deliveries. Steve Smith also hit 46 off 38 while some valuable contributions from the middle order saw Australia score 194/5.

T Natarajan was India’s star with the ball, taking two wickets for just 20 runs in his four overs.

In return, India got off to a rapid start, with the openers putting on a 56-run stand before Andrew Tye sent back KL Rahul. Kohli then joined Dhawan at the crease and soon, the left-hander scored his 11th T20I half-century.

Despite the dismissals of Dhawan and Sanju Samson, Kohli kept up the pressure on Australia, scoring a delectable scoop shot in the process that earned comparisons to and praise from his close friend and Royal Challengers Bangalore teammate AB de Villiers.

After Kohli fell at the start of the 17th over, Hardik Pandya and Shreyas Iyer took India over the line in a thrilling finish. While Iyer made the most of the five deliveries he faced, scoring 12 runs, Hardik provided the firepower India needed at the death.

The star all-rounder, who is still not bowling regularly due to fitness concerns, smashed 42 off 22 deliveries in a knock studded with three boundaries and two sixes.

The third T20I will be played on Tuesday and will be followed by the four-match Test series between the two sides.

Topics mentioned in this article