Shortly after Minister of State VK Singh said the thousands of men and women protesting the centre’s new farm laws “do not appear to be farmers”, Delhi’s ruling Aam Aadmi Party (AAP) hit back and asked if they needed to “come with plough and oxen to appear like farmers”.

“Many of the people in (the) pictures do not appear to be farmers,” Mr Singh was quoted by news agency ANI on Tuesday evening, in comments that suggested a “farmer” must have a certain look.

“What is in the interest of farmers has been done. It is not the farmers who have a problem with this (the farm laws) but others. Besides (the) opposition, people who get a commission are behind it (the protests),” the union minister added.

The AAP’s terse one-line retort comes amid pressure on the centre to respond to the farmers and as a counter-narrative is pushed by several BJP leaders, including Haryana Chief Minister Manohar Lal Khattar and Amit Malviya, the party’s IT cell chief – that the protest is politically motivated and does not actually include farmers.

Should they come with plough and oxen to appear like farmers? https://t.co/sdjOEjU9rE

On Monday Mr Malviya claimed “Khalistanis and Maoists” are behind the protests and accused the AAP of “seizing the opportunity to burn Delhi down”.

Mr Khattar on Saturday said no Haryana farmers were part of the protest, only to be shouted down by a chorus of voices brandishing government-issued ID cards as proof. He also accused his Punjab counterpart of organising the protests and referred to “unwanted elements” in the crowd.

Indignant and irate farmers from several states – including BJP-ruled Haryana and Uttar Pradesh – have marched on the national capital over the past week, determined to fight the centre over “black” laws they say will leave them at the mercy of corporate organisations and endanger their livelihood. 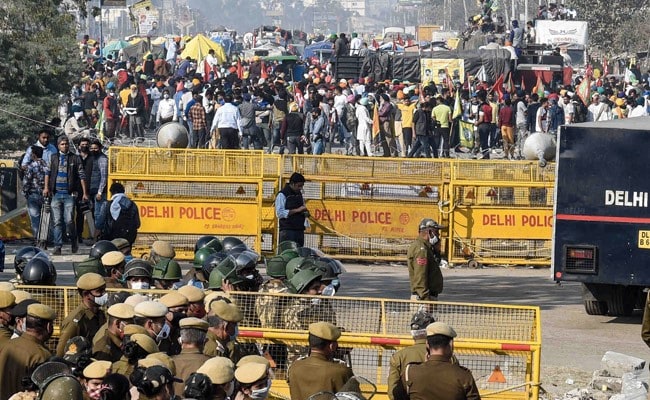 As they moved towards Delhi shocking visuals emerged of police resorting to lathi charges, tear gas and water cannons to beat back what was a peaceful protest. The government’s handling of the movement has been criticised by several people, including Canadian Prime Minister Justin Trudeau.

This evening farmers’ representatives met the government for talks that were inconclusive. A third round is scheduled for Thursday. The farmers are adamant the new laws must be repealed and have turned down proposals to form a committee to look into the matter.

The government says the laws will reform the agricultural sector and allowing farmers to sell their produce anywhere in the country. Critics and farmers fear they will be overrun by corporates.

With input from ANI