Using the term ‘smart’ as a prefix to any electronic appliance or device is a common trend now, usually used to denote the ability of that appliance to function through an app. Today, it’s possible to buy things like light bulbs, ceiling fans, and air conditioners, all with smart connectivity and the ability to be controlled remotely or by voice commands. One particularly simple type of device – a smart plug – can extend those capabilities to non-smart devices in your home as well.

Today, we’re exploring the idea of smart plugs and their utility through two recently launched options, the Amazon Smart Plug and Realme Smart Plug. Priced at Rs. 1,999 and Rs. 799 respectively, these smart plugs offer a convenient way to make appliances smart and voice controllable. Take a look at our comparison to find out which is the better pick.

Although both are rated for the same power load, the Realme Smart Plug (right) is considerably smaller than the Amazon Smart Plug (left)

What is a smart plug, and what does it do?

While many devices such as air purifiers, air conditioners, and lamps are natively designed to be smart, these usually come priced at a premium. If you have appliances at home that aren’t smart – lamps, smartphone chargers, electric kettles, and the like – but you want to be able to control them remotely, set up schedules, or just confirm whether they’re on or off, a smart plug is an affordable and easy way to do it. Instead of plugging the device directly into one of your wall power sockets, you place a smart plug in the middle, and then leave the power for that socket on.

Once set up, the smart plug can be connected to your home Wi-Fi and controlled using an app. This will let you control the power supply to that device from anywhere in the world, provided you have Internet connectivity and your plug is able to connect to your Wi-Fi at home. Many smart plugs can also be linked to voice assistants such as Alexa and Google Assistant, and then controlled through those specific apps, or voice commands. If you have a smart speaker at home with an always-on microphone, you can simply tell it to switch on or off the plug.

The primary advantage of using a smart plug is not having to get up and turn on a switch every time you want to use that appliance; you control it using your smartphone or voice commands. It can also be helpful if you’re away from home and need to power on a non-smart appliance such as a geyser or air purifier, or to set up routines and schedules, group devices to function together, or help differently abled people operate certain appliances easily, among other potential purposes. 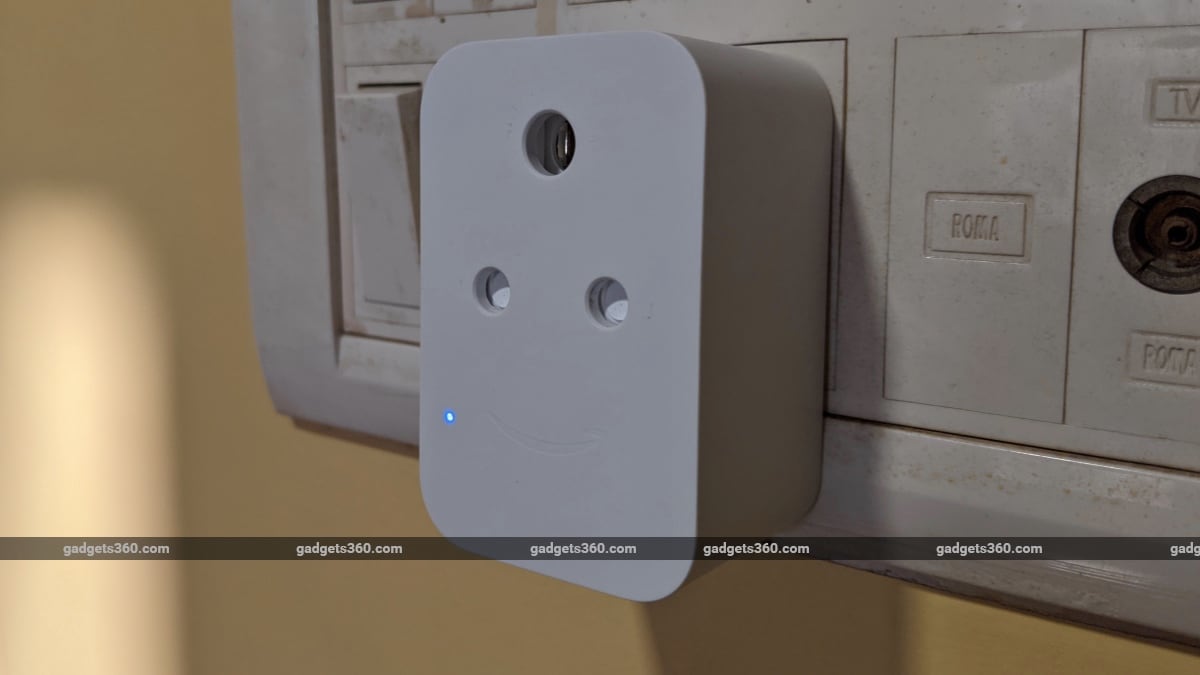 The first of the smart plugs on test here is the Amazon Smart Plug. Priced at Rs. 1,999, this smart plug is large and feels quite well built, with standard pins for Indian plugs at the back, and its own socket at the front. A small button on the side allows the device to be controlled manually, and an indicator light on the outward facing side tells you the power status of the plug. The Amazon Smart Plug supports a maximum load of 6A, which is fine for most small appliances but it should not be used with large appliances such as geysers and air conditioners.

Setting up the Amazon Smart Plug is quite easy. The process requires the Amazon Alexa app (available for Android and iOS). The steps to set it up are described in the leaflet that comes along with the plug, and are quite easy to follow. It took me less than three minutes to complete the setup process, and add the smart plug to a ‘room’ within the Alexa app. Once this is done, you can include the Amazon Smart Plug in any routines you create, and control it through the Alexa app. The plug retains its power state if the main switch is turned off accidentally or if you face a power cut.

An easier way to control the Amazon Smart Plug is through hands-free voice commands to Alexa, through your phone or a compatible smart device, if you have one at home. You can set the plug’s name to something convenient and easy to remember, such as the name of the appliance it controls, or its location in your home. I kept it simple with ‘Plug’ – and could then ask Alexa to turn it on or off. This worked well for me with an Amazon Echo Input Portable. It will naturally work better with more capable Echo devices or other smart speakers with long-range always-on microphones.

I had the Amazon Smart Plug connected to a four-socket power strip, to which I had various phone, tablet, and wireless chargers connected. I was able to use the plug to remotely control how long my smartphones and tablets would charge for. I also tried using the smart plug to control a mosquito repellant. Voice controls were useful in the former case when I was at home, while app-based controls came in handy for the latter.

The more affordable of the two options on review here is the Realme Smart Plug, priced at Rs. 799. It’s considerably smaller than the Amazon Smart Plug both in thickness and overall size, but feels similarly well built. There is a standard three-pin socket at the front and a matching plug at the back. A manual control button is on the bottom, and the indicator light is on the front. Like the Amazon option, the Realme Smart Plug also supports a maximum load of 6A, and should not be used with heavy appliances.

Setup and use of the Realme Smart Plug requires the Realme Link app, and it took me just about two minutes to get it ready. Once set up, a quick switch on the home screen of the app allowed me to turn the plug on or off, and I could also set timers and schedules for its operation. You can create groups if you have other Realme devices set up as well. Unlike the Amazon device, the Realme Smart Plug doesn’t retain its power state after power cuts; it will set itself to ‘On’ when power is restored.

The Realme Smart Plug works with both Google Assistant and Alexa, and the Realme Link app has to be associated with the Google Home and Alexa apps for this to work. You can have both active, or just one of the two, if you choose. Google Home was a bit easier and quicker for me to set up with the plug, while Alexa required enabling a specific skill which took a bit longer to complete. Once done, the Realme Smart Plug worked based on voice commands to an Amazon Echo Input Portable and Google Nest Audio, as well as Google Assistant or Alexa through my smartphone.

Like the Amazon Smart Plug, I had the Realme Smart Plug set up with my four-socket power strip to control various wired and wireless chargers, and also used it to control the mosquito repellant. The ability to use it with Google Assistant and the Google Home app was a big advantage for me, but this obviously depends on your preferences and whether you already have devices geared towards either of these smart home ecosystems. 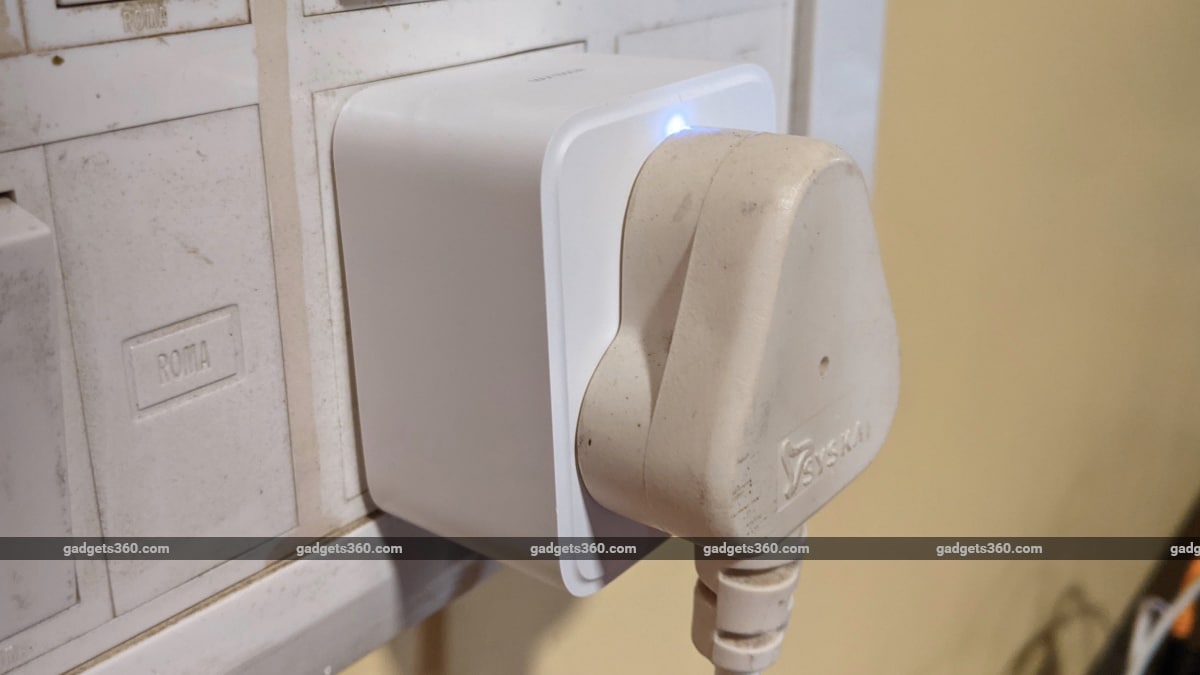 The Realme Smart Plug works with both Alexa and Google Assistant

While both of these smart plugs worked well, the Realme Smart Plug is the clear winner here for a couple of key reasons. First, it’s considerably more affordable at Rs. 799, and second, it supports both Google Assistant and Amazon Alexa for voice controls. The Amazon Smart Plug does have power state retention, a particularly useful feature in India, but this doesn’t justify the considerable price difference, in my opinion. That makes the Realme Smart Plug the better bet.

It’s important to once again point out that both of these plugs are rated for a maximum load of 6A, and shouldn’t be used with heavy appliances. If you want to add smarts to appliances like geysers, water pumps, and air conditioners, you’ll need to buy a 16A smart plug. Many brands including Wipro, Oakter, and Ambrane, to name a few, do sell these higher-rated smart plugs in India.

How to find the best deals during online sales? We discussed this on Orbital, our weekly technology podcast, which you can subscribe to via Apple Podcasts, Google Podcasts, or RSS, download the episode, or just hit the play button below.

Affiliate links may be automatically generated – see our ethics statement for details.