Video of Chinese construction in the Cona County, along Arunachal boundary. High-res: here and here

China has constructed at least 3 villages, approximately 5 kilometres from the Bum La pass which lies close to the tri-junction between India, China and Bhutan in western Arunachal Pradesh.

Beijing disputes the boundary between India and China in this region and the new constructions here could be a significant step towards reinforcing its territorial claims along the Arunachal Pradesh frontier.

”China has been using a strategy of settling Han Chinese and Tibetan members of the Communist Party along the India border to strengthen its territorial claims and escalate border intrusions,” says China-watcher Dr. Brahma Chellaney. ”Like it used fishermen in the South China Sea, China uses civilian resources – herders & grazers – as the tip of the spear to intrude into Indian-patrolled Himalayan areas.”

The new satellite images presented in this report come a week after high-resolution satellite images appeared of Chinese village construction in Bhutanese sovereign territory, just seven kilometres from the Doklam face-off site between Indian and Chinese forces in 2017.

The villages shown in this report lie within Chinese territory and were being constructed at the same time that Indian and Chinese soldiers faced off in Eastern Ladakh, in the worst crisis the two nations have faced since the 1962 war. That standoff continues with tens of thousands of soldiers having hunkered down for a long deployment through the intense winter after 8 rounds of military talks failed to achieve a breakthrough.

The images presented in this report, acquired from Planet Labs, show a single village having been constructed in the area by February 17, 2020. This features more than 20 structures, thought to be chalets, which can be easily distinguished through their red roofs. The second image, dated November 28, 2020, shows the addition of three additional enclaves with at least 50 structures.  NDTV is aware of the presence of at least one more enclave in this area with 10 structures. Each enclave is within one kilometre of one another. All of the enclaves are connected with tarred, all-weather roads. 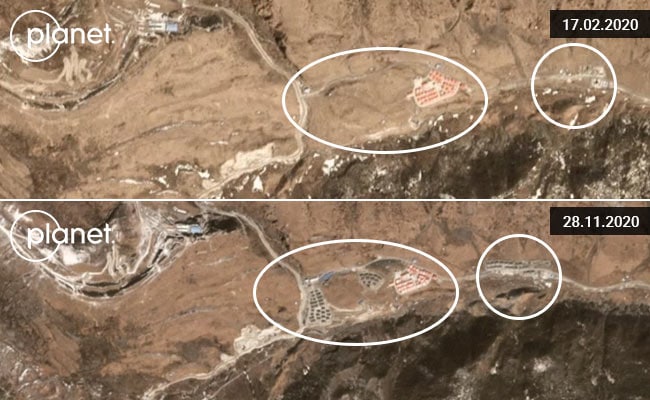 At least 3 more enclaves (villages) have been added to a village already constructed in the area by February, 2020.

China disputes the legal status of the boundary in this region and Chinese maps continue to show 65,000 square kilometres of territory south of the line as being a part of Beijing’s South Tibet Region. India, which has rejected Beijing’s claim for decades, insists that the historic McMohan line proposed by the British administrator Sir Henry McMohan at the 1914 Simla Convention defines the boundary here.

In September 2017, the Chief of Defence Staff, General Bipin Rawat, then Army Chief, had warned of China’s efforts at `salami slicing’ into Indian territory. “As far as [the] northern adversary is concerned, the flexing of muscle has started. The salami slicing, taking over territory in a very gradual manner, testing our limits of threshold is something we have to be wary about,” the General had warned.

This is precisely what has been happening across the Sino-Indian frontier – in Doklam (near Sikkim) in 2017, across eastern Ladakh this year and potentially near the tri-junction in western Arunachal Pradesh as the images in this report indicate. 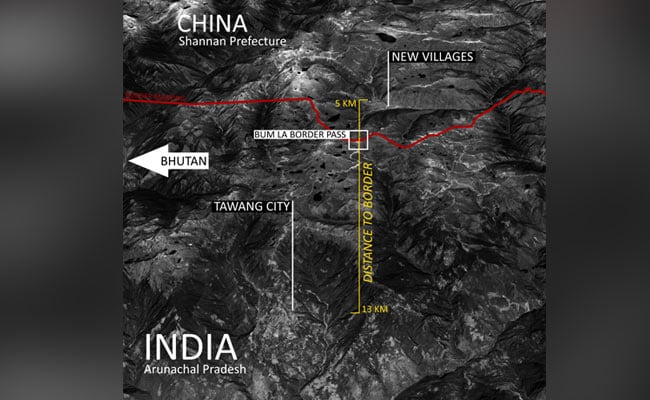 Map showing location of new Chinese enclaves near the Bum La border which lies near the tri-junction between India, China and Bhutan.

Significantly, construction across the Bum La pass is exactly what the Chinese government mouth piece, Global Times, identified in a detailed report in August which looked at infrastructure construction in the Shannan Prefecture which borders Arunachal Pradesh. ”For residents who set up a home close to the border line, herding is patrolling and living is guarding the frontier,” the report said. The new villages are a stark contrast from the dwellings of villagers in the past. “The new houses have water, electricity and internet access.” Significantly, Cona, a crucial border county in Shannan which shares a 213 kilometre boundary with India plans ”to relocate 3,222 people of 960 families to the weakly controlled areas on the borders on a voluntary basis.”

The Deputy Party Secretary, who is the Chief of Cona county is quoted in the Global Times article as saying, ”The India-controlled areas are just a mountain away.”