China has established a village 2 km within Bhutan’s territory, very close to Doklam where the Chinese and Indian militaries had a tense standoff in 2017, images posted by a senior journalist with the Chinese state media showed on Thursday.

In tweets that have since been deleted, Shen Shiwei, a senior producer with Chinese CGTN News, posted the images this morning of the village established in what he said was the Doklam area and later indicated the precise location of the settlement.

1.This is an astounding tweet with clear evidence of a CHINESE LANDGRAB WITHIN BHUTANESE TERRITORY, app. 9km from the India-China faceoff site in Doklam. The map shown here by @shen_shiwei, a senior journalist with Chinese state media, indicates this village is 2 km inside Bhutan https://t.co/UdNtS309yM

3. For reference – the big red box is where the Doklam face off between India and China took place a few years ago. And the small box is where the village is located per @shen_shiweipic.twitter.com/CzNqZlz4Lq

4. And this is a zoomed out location – Sikkim to the west, China to the north and the location of the village to the east, well within Bhutan. pic.twitter.com/zS2alRArHc

Nice catch Vishnu, followed your trail, clearly a settlement has come up right there ! Adding an image here. https://t.co/c0JURq2pUTpic.twitter.com/wm1TH1lZPD

Here’s a CGTN news producer openly admiting that China has occupied and now populated part of a sovereign country. This Pangda village has been constructed (as shown by the included map) ~2.5km beyond Bhutan’s international border. China now baselessly claims about 12% of Bhutan. https://t.co/3TxNSffYdJpic.twitter.com/fEAgWXk7Ln

If you look at the map Shen shares, he cheekily crops so that it doesn’t show the settlement he’s talking about is across the Bhutanese border. Second picture shows the border. pic.twitter.com/uRdp4QaIad

The Chinese settlement has come up just 9 km from the Doklam standoff site. 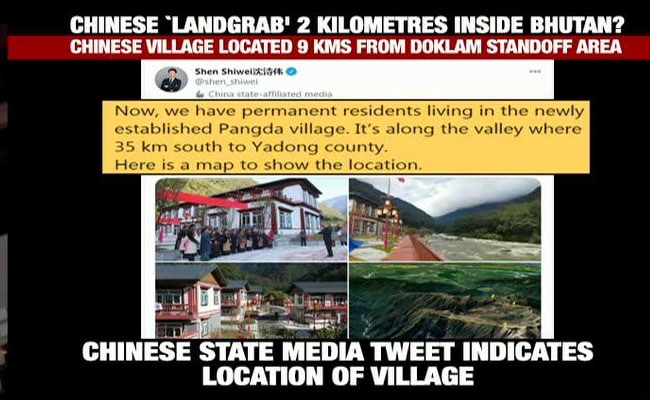 The now-deleted tweet by a senior journalist from the Chinese state media. 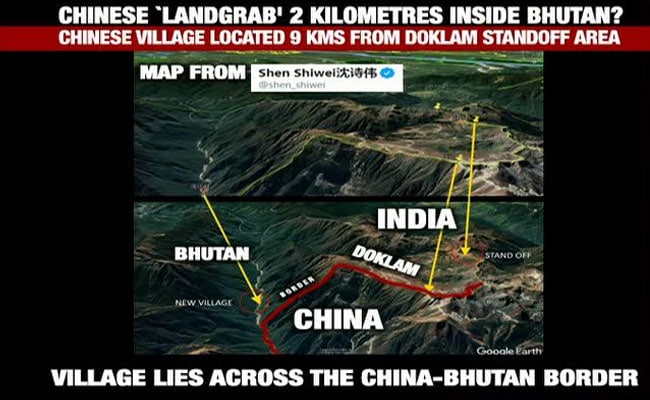 Comparing the location of the village from Chinese state media to actual ground location.

The move is particularly worrying for India since it is responsible for the territorial integrity of Bhutan which mains a limited armed force.

NDTV is reaching out to the government of Bhutan to ask if they have allowed China to populate areas within its territory.

The Doklam standoff had been the most serious face-off in decades between India and China before the confrontation in eastern Ladakh that began earlier this year and peaked in June with a clash that left 20 Indian soldiers dead and an unspecified number of Chinese casualties.

Since then, the nuclear-armed countries have sent in tens of thousands of troops on the rugged frontier between Ladakh and the Chinese-held Tibetan plateau, raising the risk of further confrontation even while looking for ways to de-escalate.

Last week, government sources told NDTV that India and China have readied a three-phase plan for disengagement, however, there is no signature or agreement on the plan’s implementation yet. No time period has been agreed upon within which to implement the plan; neither is the extent to which it will happen decided between the two sides.