Although there are many brands selling cleaning robots today, among the first well-known options was iRobot, popular for its Roomba robot vacuum cleaners. The company has been present in India for a while now, with a wide range of robots that includes not only the Roomba series of vacuum cleaning devices, but also the more niche Braava series. These robots don’t vacuum, but wet mop instead. Today, I’m testing a premium product in the Braava series, the iRobot Braava Jet M6 smart mopping robot.

What is the iRobot Braava Jet M6, and what’s in the box?

Unlike many of the cleaning robots you’ll find today, which are primarily vacuum cleaners, the iRobot Braava Jet M6 has no vacuum cleaning functionality at all. Instead, this is a dedicated wet-mopping robot. While some of the robots I’ve reviewed, including the Mi Robot Vacuum Mop-P and Milagrow iMap 10.0 do have wet-mopping as an additional built-in feature, the way the Braava Jet M6 does it is admittedly much more sophisticated.

Since there’s no vacuum cleaner, the iRobot Braava Jet M6 is considerably smaller than all of the other cleaning robots I’ve reviewed. Much of its volume is occupied by its removable water tank, which is considerably larger than the ones on other devices with secondary mopping functionality. The tank connects to a jet system that sprays water from the front of the device into the path of the mop, rather than dripping it from below.

A removable fitting on the bottom of the device runs over the freshly sprayed water, and this process continues until all areas have been covered. Interestingly, dry sweeping fittings have also been included, and the device can sweep as it moves without using the water-jet functionality. The iRobot Braava M6 also has a small speaker on board for sound and voice prompts to let you know when it’s working, or if it encounters problems in operation.

On the top of the iRobot Braava Jet M6 are a lid for the water tank compartment, and three buttons: Clean, Home, and Spot Clean. The box includes a base charging station which plugs into a wall power outlet, two disposable wet mopping pads, one disposable dry sweeping pad, one washable and reusable wet mopping pad, and one washable and reusable dry sweeping pad. 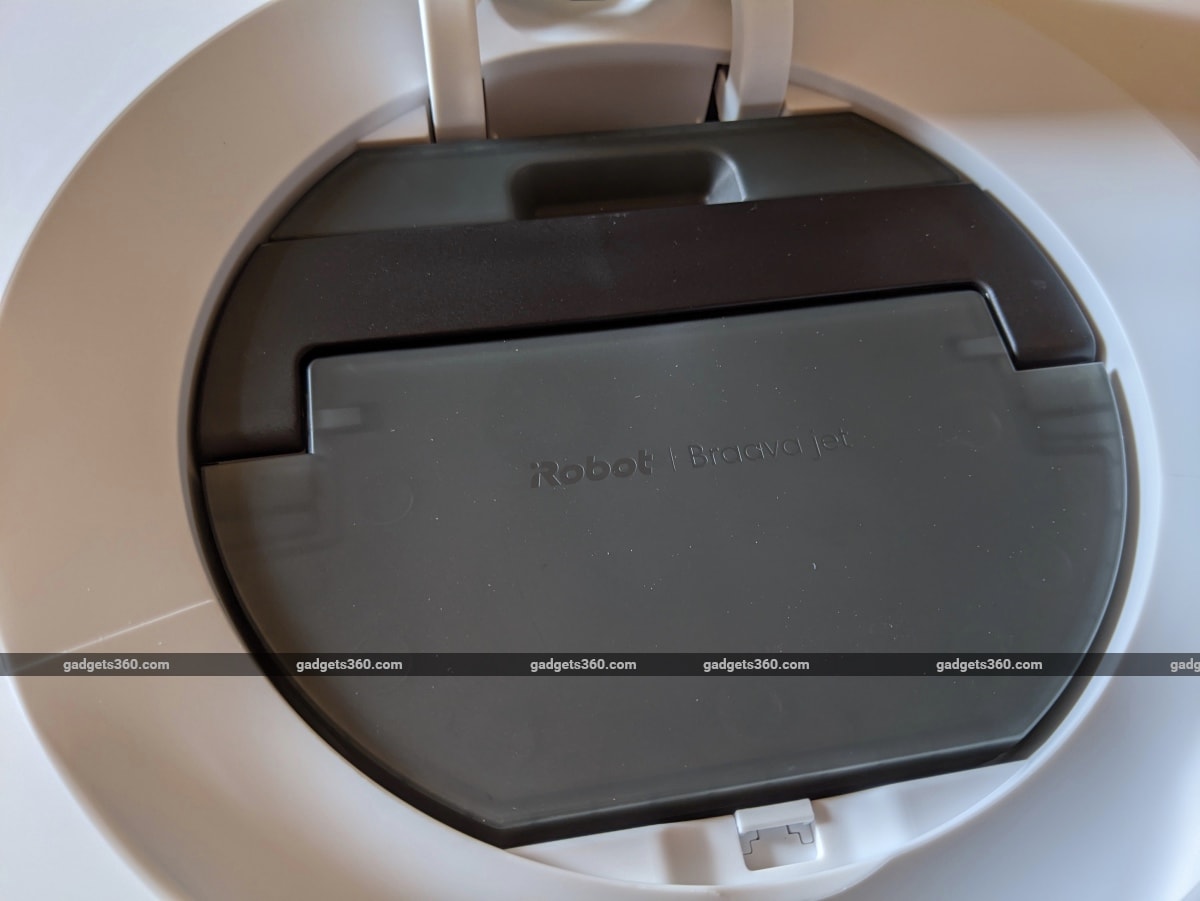 In my experience, the best form of navigation for cleaning robots is a laser navigation system, which tends to be the quickest and most accurate. Camera-based navigation, as is present on the iRobot Braava Jet M6, tends to be less accurate. That said, the position and angle of the camera do seem to make a difference here, with the device usually navigating properly in well-lit rooms. There is also an RCON (Room Confinement) sensor on the Braava Jet M6, which allows it to locate its charging station and return to it when its work is done or it needs to recharge.

Navigation was less than ideal though, because the robot needs your home to be well lit. However, in most cases, if I started a cleaning job using the phone app when the Braava Jet M6 was in its dock, it was able to complete the task and find its way back. On some occasions, it had trouble with negotiating its way past furniture, and did get itself stuck in ways that needed me to free it manually. Thanks to the RCON sensor, the iRobot Braava Jet M6 was able to return to its docking station easily when in direct line-of-sight.

While the device did usually choose the most efficient path to clean and worked in surprisingly accurate straight lines, it was quite calculated – and as a result, slow – in its approach. This meant that it took about 90 minutes to fully mop my home – thrice as long as the much quicker Mi Robot Vacuum-Mop P. This could be partly because its method of jet mopping requires more calculated movements and frequent halts, but even despite that, this is an objectively slow cleaning robot.

While not as informative and data-heavy as some of the other apps for cleaning robots, the iRobot app is visually more attractive, and geared towards ease of use. Unlike other apps that start with the map, this one tries to simplify the usage process. This might come across as a bit too basic for users who like to have a bit more data and control, but the ease of use is a positive in its own way.

Up front, the app visually shows the status of the robot, including a rough estimate of the battery level, what it’s doing or what needs to be done to prepare it for cleaning, and a quick toggle to either start or pause a cleaning task. You can create favourite jobs, to have the device clean everywhere or only in specific rooms, and access the saved map to edit the room layout. 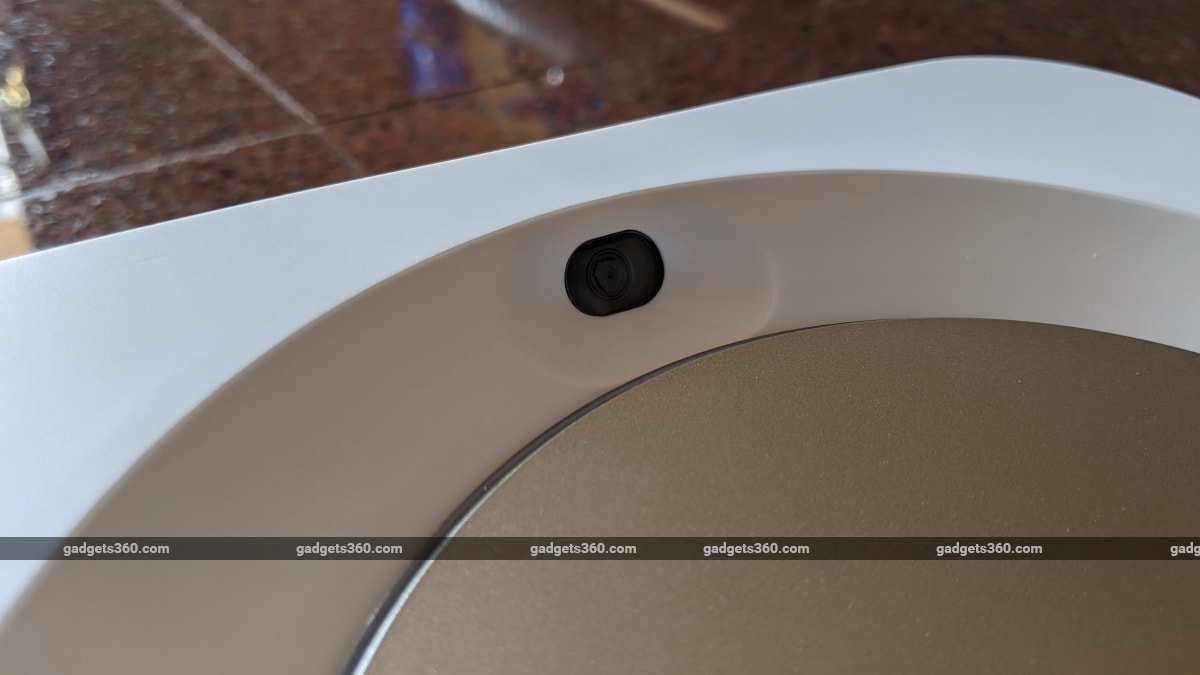 The iRobot Braava Jet M6 uses a camera to navigate, and this requires well-lit conditions for accuracy

You can’t check the progress of a cleaning task or the exact location of the robot on the map of your home. The map is only to help plan tasks or see which areas have been cleaned after the job is complete. When paused during a cleaning task, the app would tell me which room the robot is in, but this is far from the more capable tracking abilities of cleaning robots with laser-based navigation.

You can also use the app to adjust basic settings on the robot including the jet spray intensity, see the cleaning history, set cleaning schedules, and create ‘keep out’ or ‘clean’ zones to demarcate areas where the device should not go or should specifically clean. On the whole, the app is a bit simple, but covers all core functions usefully enough.

As stated, the iRobot Braava Jet M6 is not a vacuum cleaning robot, like most similar devices you can buy right now. Instead, it sweeps or mops, with the latter function using the water jet system to loosen grime on the floor before the mop wipes over it. The system is incredibly effective, and ensured that my floors were far cleaner than what the Mi Robot Vacuum-Mop P or Milagrow iMap 10.0 could achieve.

The iRobot Braava Jet M6 does take its time to get the job done, but isn’t as intrusive as the vacuuming robots. There’s no noisy vacuum mechanism here, so the Braava Jet M6 is very quiet in operation. I occasionally heard the wheels turning or the spray of water, but this was soft and not a bother at all. 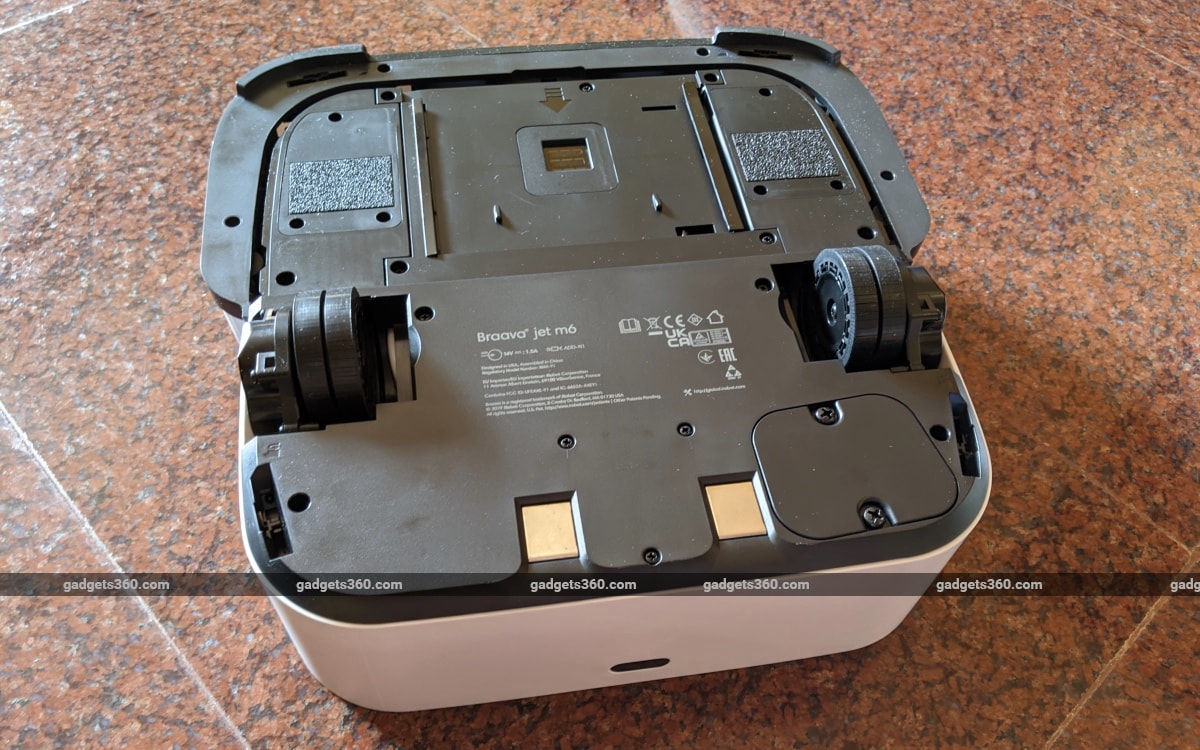 Apart from the wheels and sensors at the bottom, there is also a clip to attach the mopping or sweeping pads at the front

There’s a separate set of pads for dry sweeping, and the device in this mode doesn’t use the water jet system; it only sweeps the floor while holding dirt using the fibres of the dry sweeping pads. This cleaning mode doesn’t do much good since there’s no vacuum to scoop up the dirt, but it could be a useful for the occasional spot cleaning task, or to run right before or after a mop task for a bit of extra cleaning.

I did need to wash the mop pad fairly regularly – at least once every three full cleanings of my 600-square-foot home – since it picked up a lot of grime while running wet. Leaving it dirty affected both the speed and effectiveness of the cleaning. However, by making sure I kept the pad clean, I didn’t need to manually mop my home even once during the time that I had the iRobot Braava Jet M6; the mopping is that good.

You can add the Braava Hard Floor Cleaning Solution to the water tank for a fresher scent and more effective cleaning, but the solution is expensive. The company doesn’t recommend the use of any other additives in the water tank as it says these could damage the workings of the Braava Jet M6, but I did try using it with a few drops of floor cleaner on the floor or directly on the mop pad for the device to run over, and this worked well enough for me.

With most other cleaning robots, the biggest power consumer is the vacuuming function, and as a result, even an hour of continuous use can drain the battery level to near empty. The iRobot Braava Jet M6 doesn’t need too much power to spray water, drive itself around, and maintain a connection over Wi-Fi. As a result, even its thorough cleaning tasks that ran for nearly two hours didn’t drain the battery too much.

The app doesn’t show the exact battery level, instead displaying a rough indicator, so I wasn’t able to accurately measure power consumption. However, I estimate that the iRobot Braava Jet M6 can clean a home of up to 1,500 square feet in size on a single charge. Like other cleaning robots, the Braava Jet M6 is able to head back to its charging dock to charge when a task is complete, or when the battery is low. In the latter case, it will automatically resume cleaning once sufficiently charged.

The dock needs to be placed on the floor in a spot that is accessible to the robot, and plugs into a power outlet. There is a baseplate that attaches to the main body of the dock, which is used to prevent the wet mop pad from dripping onto your floor, and this was effective in its purpose. Charging was fairly quick, with the device taking just over an hour to fully recharge after cleaning my 600-square-foot home once. 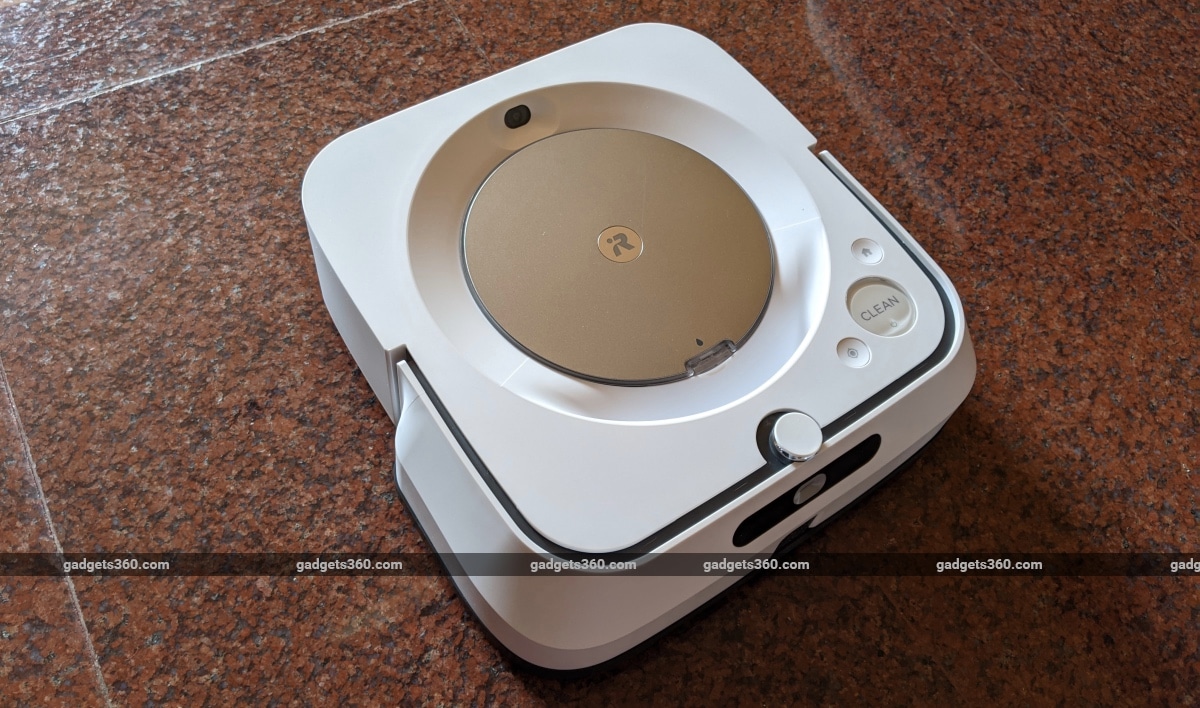 Although this isn’t a vacuum cleaner, the iRobot Braava Jet M6 is very effective at its core function of mopping

The iRobot Braava Jet M6 is a rather unique product in its segment, offering only wet mopping functionality for Rs. 54,900. There are options with both vacuum and mop functionality at much lower prices, but none of them can claim to mop as effectively as the Braava Jet M6. This is the kind of device that can completely replace the need to mop manually.

That said, it’s still very expensive, especially for a device that doesn’t even vacuum. The occasional issues with navigation and the time it takes to complete its job are slight downsides, but there isn’t much else to complain about here – this is an effective and very useful device.

If you’ve got the budget for it, the iRobot Braava Jet M6 could be complemented by a vacuum cleaning robot from the Roomba series. Both of these can work together using the same app and map, to offer a complete vacuuming and mopping solution for your home. It would be expensive, but going by what the Braava Jet M6 is capable of, a combination like that promises to be very effective.

How to find the best deals during online sales? We discussed this on Orbital, our weekly technology podcast, which you can subscribe to via Apple Podcasts, Google Podcasts, or RSS, download the episode, or just hit the play button below.