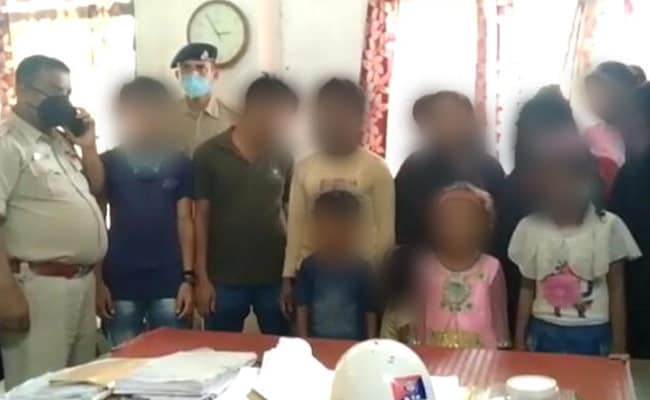 Nine Rohingya refugees, including three women and a child, were arrested from the railway station in Assam’s Guwahati on Sunday morning. They were allegedly carrying fake UNHCR (United Nations High Commissioner for Refugees) ID cards.

A GRP, or Government Railway Police, personnel said the group – six women, three men and a child – was arrested during a check on the Agartala-Deogarh Express. They were accompanied by an Indian citizen – Aman Ullah of Jammu’s Narwal.

On Friday, 15 Rohingya – six children, six men and three women – were arrested by GRP personnel in Badarpur in Karimganj district as they tried to board the Silchar-Agartala train.

Since none of the 15 have valid papers, their arrest is being treated as a case of illegal entry, the GRP said, adding that they had travelled from Aligarh in Uttar Pradesh, where they were looking for jobs, and were trying to return to Bangladesh.

Earlier this week the Home Ministry told parliament that those entering the country illegally, including the Rohingya, would be considered a “threat to national security”.

Junior Home Minister Nityanand Rai said foreign nationals entering India without valid travel documents, or who continued to stay in the country after their documents had expired, were to be treated as “illegal migrants” and dealt with in line the existing legal provisions.

India is not a signatory to the UN Refugee Convention and rejects a UN position that deporting Rohingya violates the principle of refoulment – sending refugees back to face danger.

In April the Supreme Court – ruling on the fate of Rohingya in Jammu and Kashmir – stayed their immediate deportation, saying the prescribed process had to be followed.

Indian authorities monitoring Bangladesh border have arrested several Rohingya over the past months.

In December last year, 13, including six children, were arrested in Karimganj. Police sources said they were from Cox’s Bazar and were trying to reach Delhi, Hyderabad or Jammu in search of work.

A month earlier police said they had arrested eight for trying to illegally enter India via Myanmar.

More than 7.3 lakh Rohingya Muslims – one of Myanmar’s largest minority ethnic groups – fled their homeland in 2017 after a deadly crackdown, which the United Nations would later call “a textbook example of ethnic cleansing“.

Hundreds of thousands are now living in squalid conditions in refugee camps in Bangladesh, several of which are in Cox’s Bazar. Their condition makes them easy targets for human traffickers and many also find their way to India in search of jobs, money and a better life.

With input from Reuters