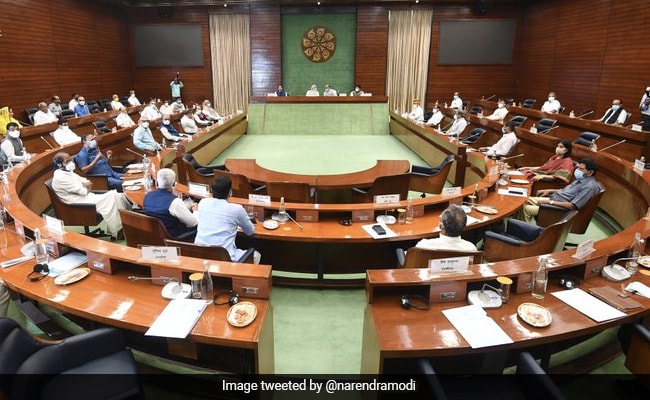 Ahead of the monsoon session, PM Modi today sought a productive sitting of Parliament.

Prime Minister Narendra Modi today chaired an all-party meeting on the eve of this year’s monsoon session of Parliament, seeking a productive sitting. The Trinamool, however, took a swipe at him saying his regular presence in the House was important.

“Took part in the All-Party meeting before the start of Parliament’s Monsoon Session. We look forward to a productive session where all issues can be debated as well as discussed in a constructive manner,” PM Modi tweeted today.

In the meeting, he said it was everyone’s responsibility to create a conducive environment to raise in an amicable manner issues concerning people. People’s representatives truly know the ground situation, he said, and such discussions enrich the decision-making process.

Parliamentary Affairs Minister Prahlad Joshi announced that Modi will address MPs of both the Houses on July 20 in the Parliament House Annexe and speak on the pandemic. The opposition parties objected to this alleging it was another way of bypassing parliamentary norms.

Derek O’Brien, who represented the Trinamool Congress later tweeted saying, “MPs do not want fancy PowerPoint presentations on COVID-19 from the PM or this government in some conference room. Parliament is in session. Come to the floor house of the House.”

“It is highly irregular for the government to do this. When the Parliament is in session, any address or presentation the government wants to make, it has to be done from inside Parliament,” CPI(M) General Secretary Sitaram Yechury said.

Mr O’Brien claimed all opposition leaders present in the meeting, including Leader of Opposition in Rajya Sabha Mallikarjun Kharge and Leader of Congress in Lok Sabha Adhir Ranjan Chowdhury, the Samajwadi Party’s Ramgopal Yadav, and BSP’s Satish Misra, refused to be addressed outside Parliament, PTI reported.

Earlier in the day, before the meeting, the Trinamool leader tweeted saying the BJP government must not mock Parliament. Posting a bar graph on the fall in the number of bills sent to standing committees, he said “legislation is serious business” and it requires scrutiny, not bulldozing.

The monsoon session will begin tomorrow and is scheduled to conclude on August 13. On day one, the Prime Minister will introduce the newly-inducted ministers to both the Houses, as is the convention.