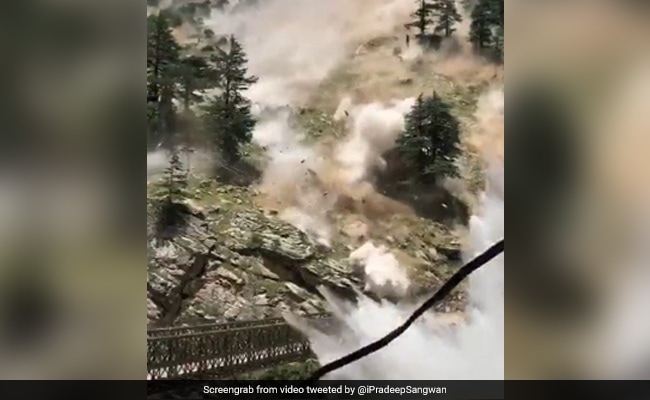 Chunks of rocks can be seen breaking off a mountain and rolling down into the valley below.

Nine tourists were killed and several were injured after a massive landslide hit a bridge in Himachal Pradesh’s Sangla valley today. In a terrifying video, large chunks of rocks can be seen breaking off a mountain and rolling down into the valley below. The video shows a section of the bridge crumbling and plunging into a river after a boulder hits it.

“All the 11 victims were tourists whose vehicle got hit by boulders,” said Saju Ram Rana, SP Kinnaur, adding the injured have been rushed to a nearby hospital.

A team of doctors is at the spot, he said.

The rocks can be seen hitting cars at the foot of the mountain, kicking up a massive cloud of dust.

Prime Minister Narendra Modi and Chief Minister Jairam Thakur expressed sorrow over the loss of lives in the accident.

“It is very sad that a vehicle carrying tourists came under its grip, in which nine died and two injured and one passerby got injured. May God grant peace to the departed souls and strength to the bereaved family,” Mr Thakur tweeted in Hindi.

“All arrangements are being made for the treatment of those injured in the accident. I wish them a speedy recovery,” read a tweet from the Prime Minister’s office.

PM Modi also announced an aid of Rs 2 lakh each for the families of those who died in the accident and Rs 50,000 to the injured from the Prime Minister’s National Relief Fund.

The weather office recently issued a landslide warning in Himachal Pradesh due to heavy rainfall predicted in the next few days. In the last few years, landslides have become a common occurrence in the hill state,