Latest News Today – Navjot Sidhu, At His Inauguration, With This Shot 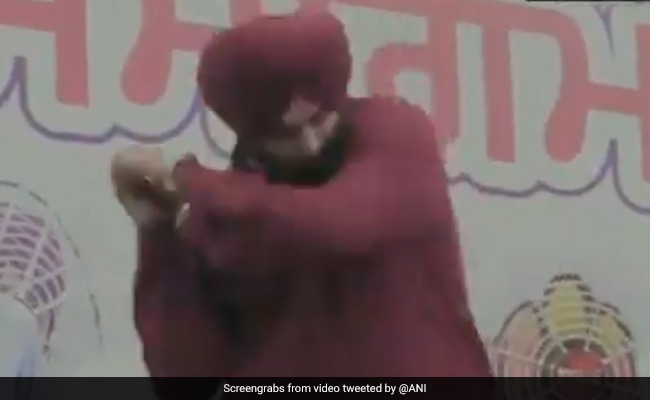 Navjot Singh Sidhu, flanked by Punjab Chief Minister Amarinder Singh and outgoing state president Sunil Jakhar, is eager to get to the podium. As his name is called out, the former swashbuckling India batsman rubs his hands in anticipation, gets up, acknowledges the crowd, and then in one swift move with phone in hand (mimicking a bat) swats away like a batsman serving a winning shot to signal his arrival as the new boss of the Congress branch in Punjab.

He glides past Amarinder Singh, sitting on his right, and touches the feet of a couple of people on the dais before he takes the podium and the centre stage at his inauguration ceremony.

“There is no difference between an ordinary party worker and the state unit chief. Every Congress worker in Punjab has become the chief of the party’s state unit from today,” Mr Sidhu said in his opening remarks to a rapturous crowd that clapped a solid round in return.

Mr Sidhu and Mr Singh, who were involved in a protracted tussle, finally buried the acrimonious past, and the proverbial hatchet, when the Chief Minister attended his inauguration ceremony.

Before that Mr Sidhu met the Chief Minister at Punjab Bhawan over a cup of tea. Their meeting effectively putting a lid on the political crisis in the state party unit.

Mr Sidhu’s promotion, announced earlier this week, was strongly opposed by the Chief Minister’s camp before he finally came on board. He replaced Sunil Jakhar as the Punjab Congress chief.

“I will work shoulder-to-shoulder with the Chief Minister. I have no ego…The Congress is united today, contrary to what our opposition is saying,” Mr Sidhu said in Punjabi in a spirited display of aggression and rhetoric.

Sidestepping his run-ins with the Chief Minister, Mr Sidhu said his focus areas are the farmers protesting in Delhi, the problems of doctors and nurses.