Latest News Today – Navjot Sidhu Says “Those Who Oppose Me Make Me Better”.

Chief Minister Amarinder Singh said he was fighting at the border when Navjot Sidhu was born.

As Chief Minister Amarinder Singh looked on from the dais – the first time the two have shared a stage in recent weeks – the ex-Army officer, the former cricketer and their party looked set for a new innings as they look to get over a squabbling that has endangered their re-election campaign.

“I have no ego. I will work with all party workers shoulder-to-shoulder. The workers are like the soul of a leader. I will respect the elders and will love those younger to me… The Congress is united contrary to what our opposition says,” he said with his customary flamboyance.

Yet his speech had faint echoes of his turmoil with Amarinder Singh, when he said “those who oppose me improve me”. And they grew louder as he referred to the state’s many problems.

“Who is accountable for deaths due to drug overdose? Who made Punjab’s youth dependant on drugs? I will hold all of them accountable. Why should we buy electricity at Rs 18 per unit? Why should those who looted Punjab not be held accountable?” he asked.

In the midst of their recent feud, Mr Sidhu’s numerous swipes at Amarinder Singh and his government dealt with many of these issues, including that of Punjabi farmers protesting the central government’s controversial new farm laws.

“We need to resolve all these issues, We have to do the politics of change,” he said.

Amarinder Singh was not to be outdone though, and hit back with veiled warnings of his own.

“Pakistan and China have come together with the Taliban… they will target Kashmir and Punjabis will have to bear the consequences. Therefore I appeal to Navjot Singh Sidhu to unite everyone so we can fight this war,” he said – a subtle dig at allegations about going soft on Pakistan. 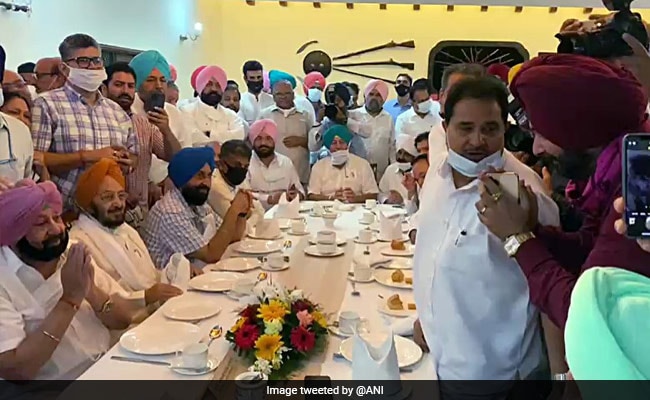 Meanwhile, as Mr Sidhu and Mr Singh gently jousted, the outgoing Punjab Congress chief, Sunil Jakhar, took potshots at both of them.

“We were hit by red tapism in our government. Our workers suffered due to that… but still we have time. We can course correct even now… The new (Punjab Congress) chief will have to take up from where I left off… Congress workers will not realise the work the party has don and, till they realise this is people’s party and not that of bureaucrats we will not succeed,” he warned.

Mr Sidhu and Mr Singh have faced off for months till the former was appointed Punjab Congress President last week, much to the consternation of the Chief Minister who gave in only at the last moment. Hours before the inauguration, the two met up for tea at Punjab Bhawan in Chandigarh.

The ‘tea party’ today marked the end of hostilities, at least apparently, given that Mr Singh had till recently refused to meet Mr Sidhu until the later publicly apologised for his severe criticism.

Nevertheless, today the new Punjab Congress chief seemed to indicate that was now behind him.

“My fights are not the issue. The farmers sitting in Delhi, the problems of doctors and nurses…these are the real issues,” he said, adding, in Punjabi, “Zyada nahin bolna si, par visphotak bolna si. (Don’t speak much, but speak explosively)”.

“When Sidhu was born in 1963, I was in the Army. When I left the army in 1970, my mother asked me to join politics. She said ‘meet with Bhagwan Singh Sidhu’, Navjot Sidhu’s father. This is the relation I share with him,” Mr Singh said.

Punjab goes to polls early in 2022