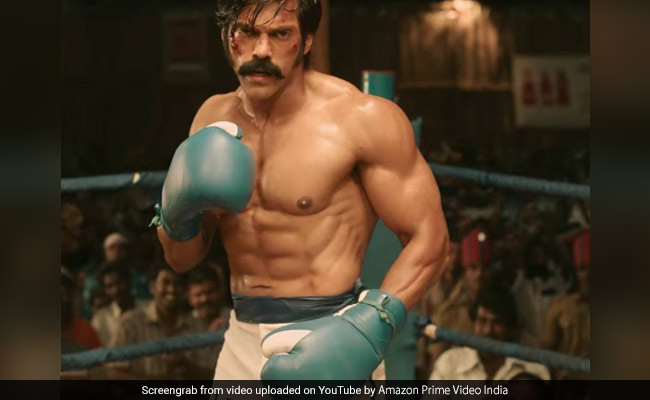 Pa. Ranjith’s new Tamil film Sarpatta Parambarai, streaming on Amazon Prime Video, comes out all guns blazing. It is a sports drama all right but there is more to the epic narrative than just gloved men trying to outpunch each other in a boxing ring. Despite its struggles with consistency of pace and tone, the film delivers many a punch that finds its mark.

The screenplay, production design and propulsive soundscape serve to create a socio-political and cultural ambience that lends the film’s underdog-fighting-all-odds story the shape and scope of an intriguing and enlightening period chronicle even as it plays out on largely familiar genre lines.

Sarpatta Parambarai vivifies a 1970s North Madras milieu in a strikingly effective manner, in the process transporting the audience back in time to a space and culture with its own unique rhythm. From scene one – a Madras Port loader itches to get away from work because a boxing event is about to get underway and he cannot afford to miss the action – the film plunges into the story of clans who once fought tooth and nail for supremacy.

Sarpatta Parambarai tends to be loud, the drama is out of its hinges at times, and the arc of the principal character, Kabilan (Arya), takes a course that may not be full of surprises. Yet, there is an abundance of riches in Sarpatta Parambarai because Ranjith’s directorial flair and sense of historical context raises the film, when it is at its best, to a level that average Indian sports films rarely attain.

Embedded in the story are the caste dynamics at play in a segregated part of town, the political upheavals of the mid 1970s triggered by the imposition of Emergency and the dissolution of the DMK government in Tamil Nadu, and the historical backdrop of the area’s boxing culture. Neither of these plot elements overshadows the essence of the film, which stems from one man’s quest for glory in the face of an unsettling social churn that affects an entire clan as it fights to live down years of defeat.

The story of Sarpatta Parambarai is located four decades ago but its portrayal of people battling oppression and political overreach has a contemporary resonance. “The Prime Minister’s autocracy is degrading our democracy,” says Rangan (Pasupathy), a revered boxing coach and political activist in an address to his clan, which is down and out in more ways than one. His warning is a call to action at multiple levels – the moral, the personal, the physical and the political – for a people up against acts that are aimed at trampling upon their rights.

The only way the Sarpatta clan – coach Rangan and wannabe boxer Kabilan are a part of it, the former its past and latter its probable future – can claw its way back into the reckoning is if they can find a fighter who can stand up to Vembuli (John Kokken), the star boxer of the rival Idiyappa clan, a man who has been winning for three straight years.

Before the chosen man can earn the right to challenge Vembuli, he has to surmount a series of hurdles. The onus falls on Kabilan, an aspiring boxer that Rangan has little faith in. Kabilan, on his part, worships the very ground that Rangan treads on. The young man bides his time.

The young man must work his way up and secure the right to represent his clan in a do-or-die bout. His path his strewn with impediments. For one, his mother Bakkiyam (Anupama Kumar) is dead against Kabilan donning boxing gloves because she believes it was the sport that drove her husband to alcoholism, gang wars and death.

Moreover, Kabilan has to contend with rivals in his own camp – coach Rangan’s son Vetriselvan (Kalaiyarasan) and Raman (Santosh Pratap), who is desperate to reclaim the legacy of a late uncle, who once controlled the Sarpatta clan. What queers the pitch the most is the prospect of being led astray even as success begins to come his way.

The first hour of Sarpatta Parambarai is a breeze – pulsating, pacy and profoundly engaging. This is the part of the film that is devoted to the conflicted Kabilan’s struggle to be accepted as a boxer worth his salt. His progress is slow, the film isn’t. It crackles with raw energy as the male protagonist, tentative and timid to begin with, begins to assert himself and makes headway in a sport that takes a heavy toll on its exponents.

A large part of the second half of the nearly three-hour film is far less convincing as the now-married Kabilan – his wife Mariamma (Dushara Vijayan) is a woman of substance who isn’t going to die wondering what life has in store for her – wrestles with domestic strife and activities that reduce him to an emotional and physical wreck. Mercifully, the final half-hour regains some of the frisson of the film’s first half and helps Sarpatta Parambarai end on a high.

Director Pa. Ranjith, whose focus is on the men in the ring and outside it, but his penchant for creating strong women characters comes to the fore in the portrayal of Mariamma. He takes only a few seconds to tell us what Kabilan’s wife is all about. At the end of a wedding song-and-dance set piece, the newly-wed woman breaks into a wild pirouette before she literally ‘pounces’ on her husband. A honeymoon shot has never been this dramatic: it tells you exactly what to expect from Mariamma. She does not disappoint.

While Arya dominates the show with a performance that aptly combines tough physicality and psychological fragility, Sarpatta Parambarai is filled with characters who do much more than to providing support to the protagonist. They contribute to making the film an effectively composite, vivid tableau.

Among those who stand out in particular are John Vijay as Kevin, a contemporary of Kabilan’s late father and the young boxer’s one-man cheer squad, and Shabeer Kallarakkal as Dancing Rose, a boxer with footwork that could put a ballerina in the shade.

Sarpatta Parambarai centres on gruff men having a go at each other with their fists and tongues, but the handful of women in the story do not take a backseat. In the role of Kabilan’s mother, Anupama Kumar has to contend with a limited bandwidth but she does not let that weigh her down one bit. As the hero’s harried but irrepressible wife, Dushara Vijayan does not put a foot wrong even when the emotional pitching of the character is in danger of going off-key.

The film occasionally meanders a bit but when it goes for the jugular its punches are unfailingly telling. One thing Sarpatta Parambarai certainly isn’t is a boxed-in boxing tale. It soars free – and high.