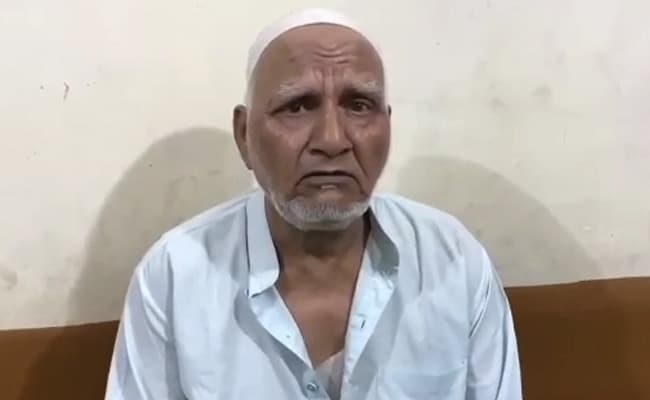 The elderly man, on camera, had said he was attacked and his beard was cut off.

Twitter, several journalists and Congress leaders have been named in an FIR (first information report) in Uttar Pradesh’s Ghaziabad over “provoking communal sentiments” after an elderly Muslim man alleged that he was assaulted on June 5. While the man, Abdul Samad, claimed in a video that his beard was cut off and he was forced to chant “Vande Matram” and “Jai Shri Ram” after the accused took him away to a forested area and locked him up in a hut, police have ruled out any “communal angle”.

The FIR filed in Ghaziabad’s Loni names journalists Rana Ayyub, Saba Naqvi and Mohammed Zubair. Online news platform “The Wire”, and Congress leaders Salman Nizami, Shama Mohamed and Maskoor Usmani have also been named. They have been accused of posting tweets without “verifying facts” and “giving a communal colour” to the incident.

Tweets were shared with a clear motive to “provoke communal sentiments”, says the FIR, adding the “misleading” posts were re-tweeted by thousands of people. The complaint further said the Ghaziabad Police had “put out a clarification” via their Twitter handle on Monday night, but the users did not delete the posts and Twitter took no action to remove them.

This is the first case against the social media giant where it has been held liable for third party content after centre’s new rules for online news publishing platforms came into effect. The microblogging site “has lost the legal shield”, sources in the government said, “as it failed to comply with the new IT rules”. “Twitter is liable for penal action against any Indian law just as any publisher is. Since they do not enjoy any protection and they did not flag a video (in the case) as manipulated media, they are liable for penal action.”

Ruling out any communal angle in the case, police have said Sufi Abdul Samad was attacked by six men – Hindus and Muslims – who were unhappy over some amulets (tabeez) he had sold them, which they believe “did not work”.

“On social media, we came across a video where an elderly man- Abdul Samad, resident of UP’s Bulandshahr, is being attacked by some men. When we investigated this further, we found that he came on June 5 from Loni border area. From there Abdul Samad, who makes amulets, went to Hazipur village. He already knew the accused. The men, who were upset with him, had called him. Several arrests have already been made,” Ghaziabad police officer Iraj Raja is heard saying in an official video statement. Three people have so far been arrested over the assault.

The FIR against Twitter and eight others has been filed under IPC sections 153 (provocation for rioting), 153A (promoting enmity between different groups), 295A (acts intended to outrage religious feelings), 505 (mischief), 120B (criminal conspiracy) and 34 (common intention) against them.

In a tweet, journalist Mohammed Zubair said, “I’ve deleted the videos that I had posted. The victim’s version of him being forced to chant “Jai Shri Ram” at this point in time do not seem to add up based on my conversations with police authorities and other journalists reporting on this issue. (sic)”

I’ve deleted the videos that I had posted. The victim’s version of him being forced to chant “Jai Shri Ram” at this point in time do not seem to add up based on my conversations with police authorities and other journalists reporting on this issue. https://t.co/cof5bjv3I4

Yogi Adityanath’s media advisor Shalabh Mani Tripathi, replying to Mr Zubair’s post, tweeted a warning in Hindi, saying: “Right now UP Police is hunting for the address. First, tell your address. This will no longer continue. Once the motive is attained, slyly delete the tweet and vanish,  the group of frustrated people spreading agendas have been at it for too long. Every lie comes with a big price to pay and every agenda has a specific motive – conspiracy, (spreading) lies, hatred.”

The case over the assault of elderly man was filed two days after the incident took place on June 5 under IPC sections 342, section 323, section 504, section 506.