Assembly election in West Bengal is due early next year

The assembly elections in Bengal are being portrayed as the most crucial ever for the people and character of the state. This is now essentially a two-party fight between the BJP and the ruling Trinamool Congress – or, as some analysts are pitching it, a two-personality fight between Amit Shah and Mamata Banerjee. The BJP says that if Mamata Banerjee’s Trinamool wins again, “the appeasement of minorities will increase and the Hindu majority will suffer. Moreover there will be an atmosphere of violence and goonda-gardi”. The Trinamool says that if the BJP wins, “the basic character of Bengal will change forever, no longer will every community live in harmony, even the essence of Bengal’s history – crafted by Rabindranath Tagore and Swami Vivekananda – will be broken as non-Bengali ‘outsiders’ will rule Bengal from the centre.”

These polar-opposite views are, of course, outrageous and extreme – but they do underline the depth and intensity of how acutely divided Bengal politics is today.

Intensifying the interest in this election is that it is seen to be a close fight. The spectacle of many Trinamool or TMC leaders switching to the BJP has also sent signals that perhaps there is a trend towards Amit Shah – who is once again the chief architect of the BJP’s election strategy. 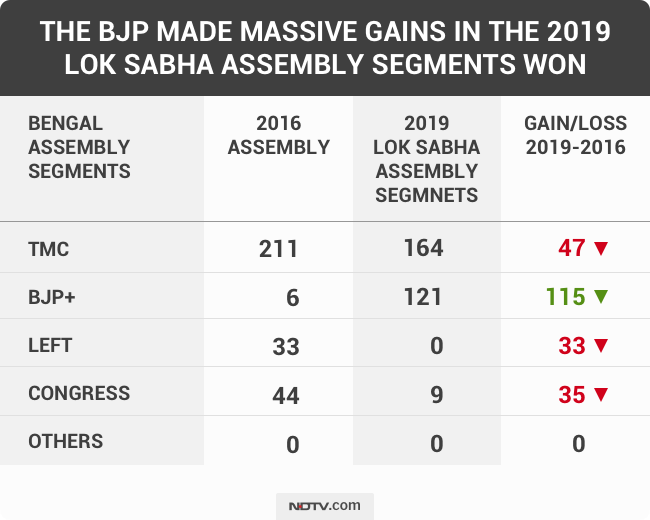 The perception of a possibly close election is based on the unexpectedly close fight in the recent 2019 Lok Sabha elections in Bengal: the number of assembly segments won by the BJP not only crossed the 100-mark, it soared to make the BJP the overwhelmingly clear runner-up party in Bengal. The BJP being so strong in Bengal was virtually unthinkable three years earlier when it won only 6 of the 294 seats in the assembly elections. Rocketing from six assembly segments to 121 in just three years (between the last state election and the 2019 general election) is not unprecedented in Indian electoral history, but is certainly close to being a record in Bengal. 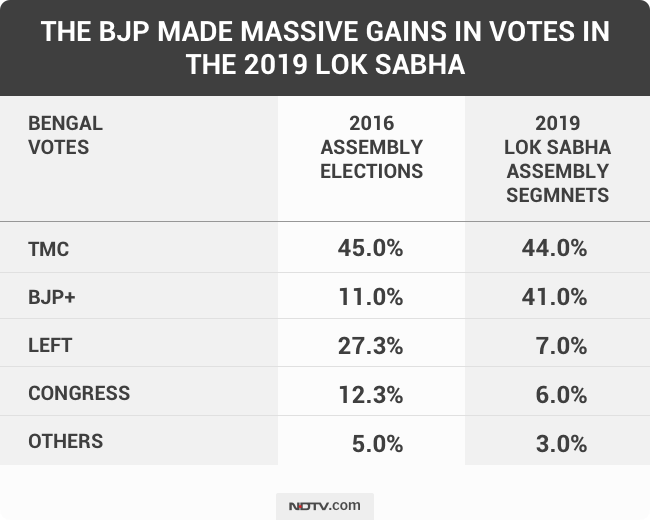 The increase in vote share for the BJP was perhaps even more stunning. The party, which throughout Bengal’s history had little or no ground support, was suddenly only three percent short of the TMC’s 44 per cent and six to seven-times higher than the support for the Left parties and the Congress. For many analysts, this three per cent difference between the leader and runner-up indicated that the BJP+ could now overtake the TMC.

But as always, there’s a twist – in fact, several twists – in the tale. The rise in support for BJP did not come at the expense of Mamata’s TMC, which held on to virtually its entire support base. 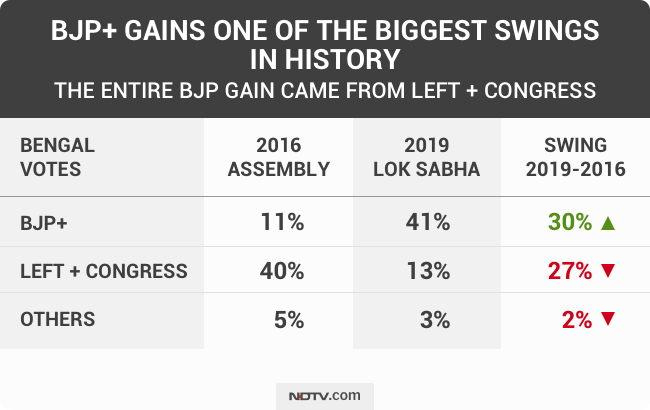 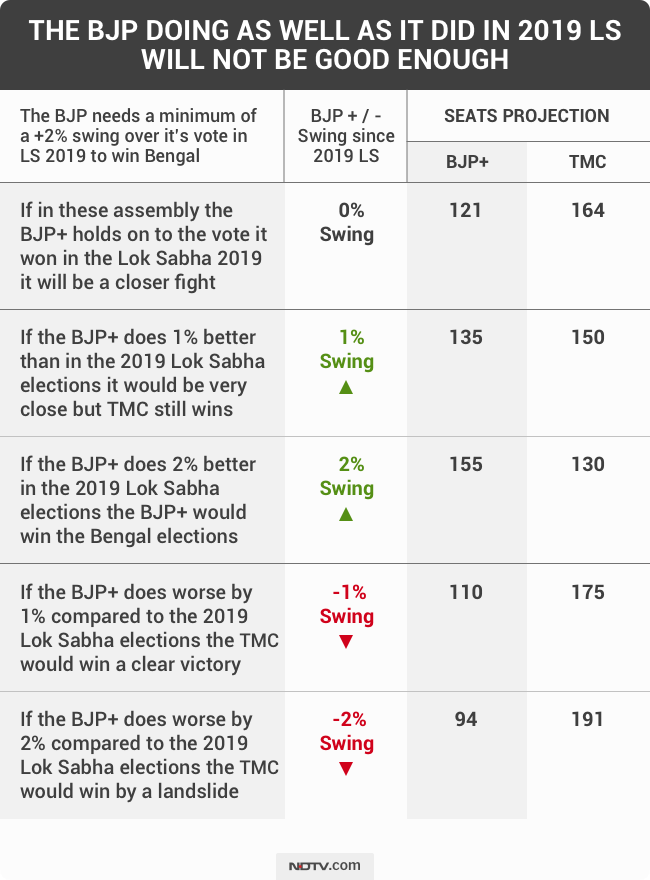 In order to get a majority and form the next government in Bengal, the BJP needs to do even better than it did in 2019 – in fact, it needs to increase its 2019 vote with a swing of +2 per cent. And even a 2 per cent swing in its favour over its record 2019 vote will give the BJP only a very narrow margin of victory – 155 seats compared with the TMC’s 130 seats. On the contrary, the downside is disastrous for the BJP. A 2 per cent swing away from the BJP will give it less than 100 seats and a landslide for Mamata’s TMC with 191 seats, which is 65 per cent of the total of 294 seats.

So, can the BJP hope or expect to get a small swing in its favour of 2 per cent-3 per cent and win these 2021 Bengal elections? The discomforting news for the BJP is that the party’s recent performance in assembly elections in other states over the last two years does not allow for much optimism. 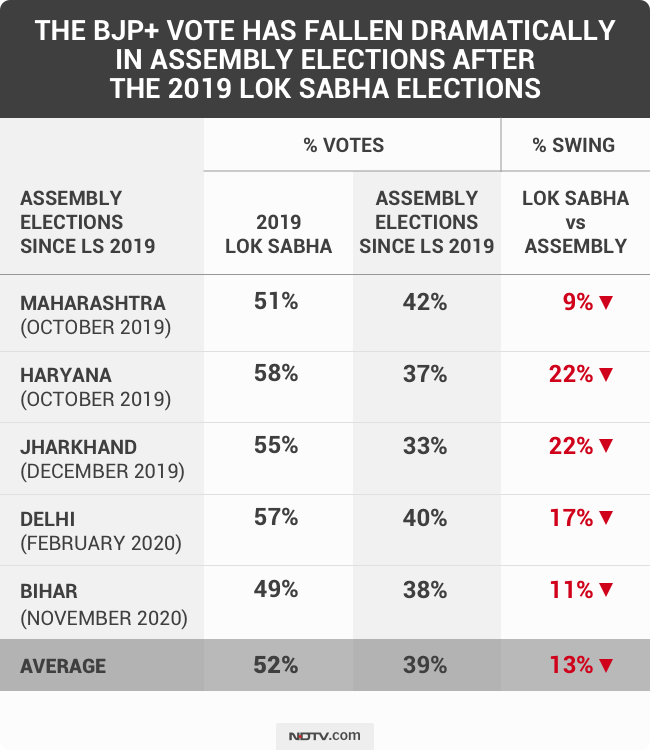 In every single state assembly election since the 2019 Lok Sabha, the BJP has encountered a swing – in fact, large swings – against the party, ranging from -9 per cent to as much as -22 per cent. In the five bigger states that have held elections since 2019, the average swing against the BJP has been a huge 13 per cent. It is the systematic negative swing, without exception, that would be a major worry for the BJP. 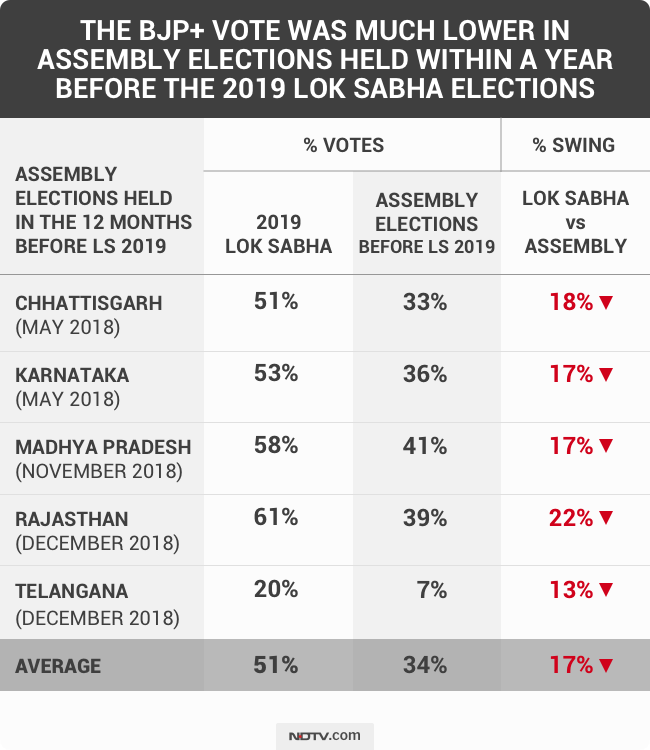 There are two basic factors behind the BJP averaging 13 per cent to 17 per cent worse in assembly elections compared with its excellent performance in the Lok Sabha. First, the individual popularity of Prime Minister Narendra Modi, whose oratory is far superior to that of any other political leader in the country. 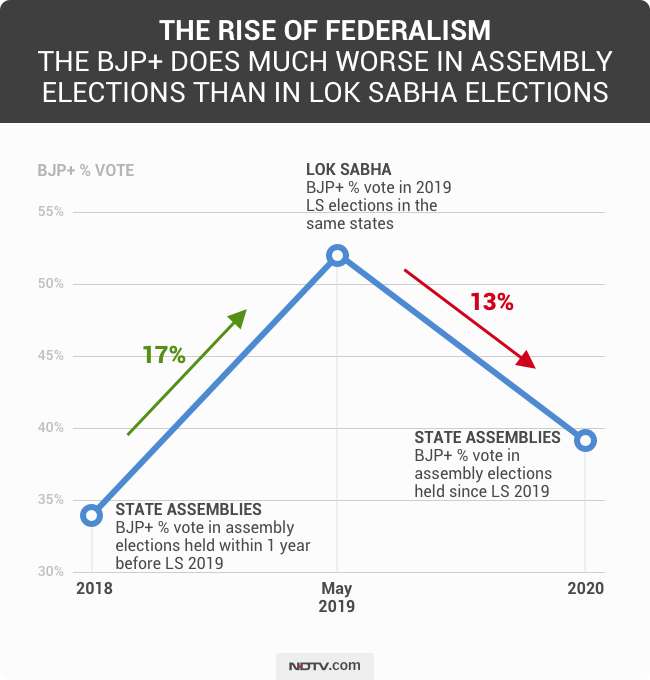 Secondly, we are witnessing an amazing rise of federalism and sub-nationalism in India. Voter turnout and involvement is much higher in assembly elections than in Lok Sabha elections. The Indian voters today are clear that they want local leaders to rule their state, and not have their state run by proxy from the centre. This federalism is still in its developing phase, but looking ahead, local leaders, local parties and state-specific issues are likely to have an increasing influence on the future of elections and power in India.

This is the trend that the BJP+, which many analysts argue is a party in essence of the centre, by the centre and some even say, for the centre, is most worried about. And it is also the key factor which undermines the BJP’s hope of winning 3 per cent more than its 2019 Lok Sabha vote in the Bengal elections.

Finally, this table below is not a forecast. It is merely a mathematical indicator that if the BJP does even half as badly in Bengal as it has in the last 10 assembly elections, it could be routed in Bengal. This may – in fact, will – change in the Bengal election because if there is one constant truth about elections, it is the guarantee that voting behaviour is full of surprises. With six months still to go, there are going to be major shifts and changes. We’ll bring you those regularly. 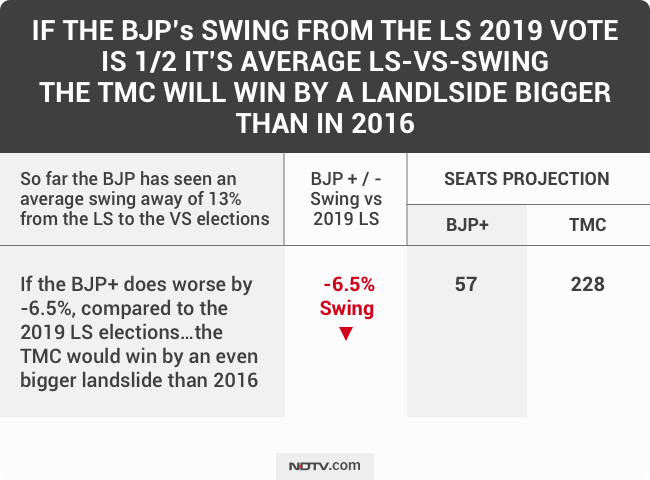