Wonder Woman 1984 follows the beleaguered DC cinematic universe’s best movie to date. The original Wonder Woman, released in 2017, was everything that DC needed to be. It was joyful and exhilarating, unlike the dark and brooding tone of Batman v Superman: Dawn of Justice. Its attempts at comedy were successful, unlike Suicide Squad. And it was true to its character’s roots, unlike Man of Steel, as Wonder Woman (Gal Gadot) exuded hope even in the worst of times: World War I. Too bad Warner Bros. pushed for a generic climactic sequence, against director Patty Jenkins’ wishes and to the film’s detriment. As such, Wonder Woman 1984 has huge boots to fill. Unfortunately, the sequel gets out of its makers’ hands, and no matter what Gadot does — and she can do a lot — she can’t save her next adventure from being a misfire.

As is the case with every superhero sequel, Wonder Woman 1984 must also be bigger and grander than its predecessor. Wonder Woman mostly took place during World War I, where do you go from there? The title of the sequel reveals it’s set in the ‘80s, and the decision to pick “1984” is especially interesting. It hints at some Orwellian connection, but weirdly, that’s nowhere to be found in Wonder Woman 1984. It doesn’t even use the excuse of its ‘80s setting to pepper in nostalgic music, as so many other movies and TV shows set in the ‘80s love to do. The only reason seems to be fears of a nuclear holocaust, but then Wonder Woman 1984 might as well have been set in the ‘60s. Why is it 1984? If the makers — the returning Jenkins co-wrote with Geoff Johns and Dave Callaham — know, they don’t care to tell us.

But the much bigger problem for the new Wonder Woman movie are the filmmaking basics. The pacing is just all over the place. Wonder Woman 1984 takes nearly 70 minutes to get going — very frustrating — but even once it actually kicks in, it routinely forgets that movies are built on momentum. You can easily paper over cracks in the script if you just plough through — just ask Christopher Nolan, he knows how to pull that off. That’s not to say there isn’t a lot going on — in fact if anything, Wonder Woman 1984 packs too much in, as we’ll discuss in a minute — but it all seems like busywork with little urgency or significance to any of it. It’s got two underdeveloped villains, one of whom isn’t served very well. It’s got a returning love interest whose return is ethically clumsy. And it never fully engages with the conundrums and seismic ideas involving the protagonist’s life.

From Tenet to WW84, What to Stream in December

Wonder Woman 1984 opens with a young Diana (Lilly Aspell) on her home island of Themyscira where she’s competing in the Amazon Games — it’s like their local Olympics but crazier. Though her opponents are more than twice her age, Diana’s quest for success pushes herself to be better, faster, and stronger than everyone. And though she’s clever, Diana is reminded by Antiope (Robin Wright) that she must be honest too. It’s interesting that this comes in the same month as Mulan, which also placed a huge value on being true to oneself. Naturally, this is the tenet that Wonder Woman 1984 wants to build itself upon. But it’s only half-successful in how the rest of the new Wonder Woman movie contributes to that, and the idea seems to get lost in the myriad narrative threads it attempts to balance.

It then jumps to 1984 with Diana (Gadot) having settled in the American capital of Washington D.C., a continent and nearly seventy years away from the events of the first film. She’s working as an anthropologist at the Smithsonian National Museum of Natural History — fitting for someone who lives forever, comparatively — and performing acts of heroism across the city. Some of it makes her feel like the friendly neighbourhood Wonder Woman. Diana is also extremely lonely, given the fact that every human she has ever known and loved has died. Wonder Woman 1984 gives us a glimpse of this in her home, which contains pictures of her lover Steve Trevor (Chris Pine) and another with a much older Etta Candy, Steve’s assistant in Wonder Woman. Diana’s near-immortality is in some ways a curse.

One day at the museum, Diana meets new employee Dr. Barbara Minerva (Kristen Wiig), an expert in various fields of study — gemmology, geology, lithology, and cryptozoology — but with none of Diana’s natural charisma. She’s insanely awkward, unable to attract people, and quickly forgotten. For Barbara, Diana looks like the perfect package and she seems to be both in awe and envious of what she is. Barbara wishes that she was everything Diana is. From her perspective, everything comes easy to Diana. And though the tragedy of Diana is that she has lost everyone who loved her, Barbara has yet to even experience the feeling of being loved. Wonder Woman 1984 quickly proves that Wiig, with her comedic background and chops, is the perfect choice to play someone like Barbara.

Wonder Woman 1984 could have easily been built around this dynamic, but Jenkins and Co. see fit to introduce a third wheel into the mix: Maxwell Lord (Pedro Pascal). In public, Max is an oil guy and a TV personality who promises riches to common folk who invest in his company. Behind closed doors, Max is a small-time con man running a Ponzi scheme of sorts. In this sense, he sounds a bit like Jimmy McGill from Better Call Saul. But Max has a plan to reverse his fortunes, with the help of an ancient artefact that seemingly has magical powers. And naturally, said object passes Barbara’s desk, where the polyglot Diana deciphers that it grants wishes. Diana and Barbara laugh it off as “extremely lame”, but not before they privately make a wish about their deepest desires.

The film’s first hour is spent setting up these two new important characters, but the two origin stories for the villains terribly slow down the proceedings. And it’s not like they are richly and intricately developed. It essentially swings from point A (uncool, nerdy, and awkward or desperate and on-the-edge) to point B (cool, sexy, and attractive or all-powerful and greedy).

With Barbara, there’s a very relatable core of how Diana is the only special one among humans, while Barbara herself is a nobody and had nothing. As she transforms into the villain Cheetah, she becomes what she desired (albeit at some cost). But Wonder Woman 1984 fails to bring home the thread as it needs to, and lands up in a clichéd thematic territory before dissolving into uninspired fisticuffs. Their battle turns her into an obstacle on the way to the video game boss, rather than a destination unto herself. Jenkins was forced into a climactic fight in the first Wonder Woman, but this is all of her own making.

With Max, Wonder Woman 1984 wishes to expound on its early moral about the importance of honesty. Max wants the world to only think of themselves — there’s a late-game montage that informs us of how this worldview of his was created — but he’s hiding the true cost of the promises he makes. But again, those ideas aren’t convincingly structured and the outcome feels half-earned. Where this arc is managed better is in how it culminates, not in a typical big battle, but rather through Diana’s words and her message of empathy and peace, which links into the character’s compassionate roots. “We can’t all have what we want” is an important message in an increasingly isolated world where sustainability is a greater concern than ever. 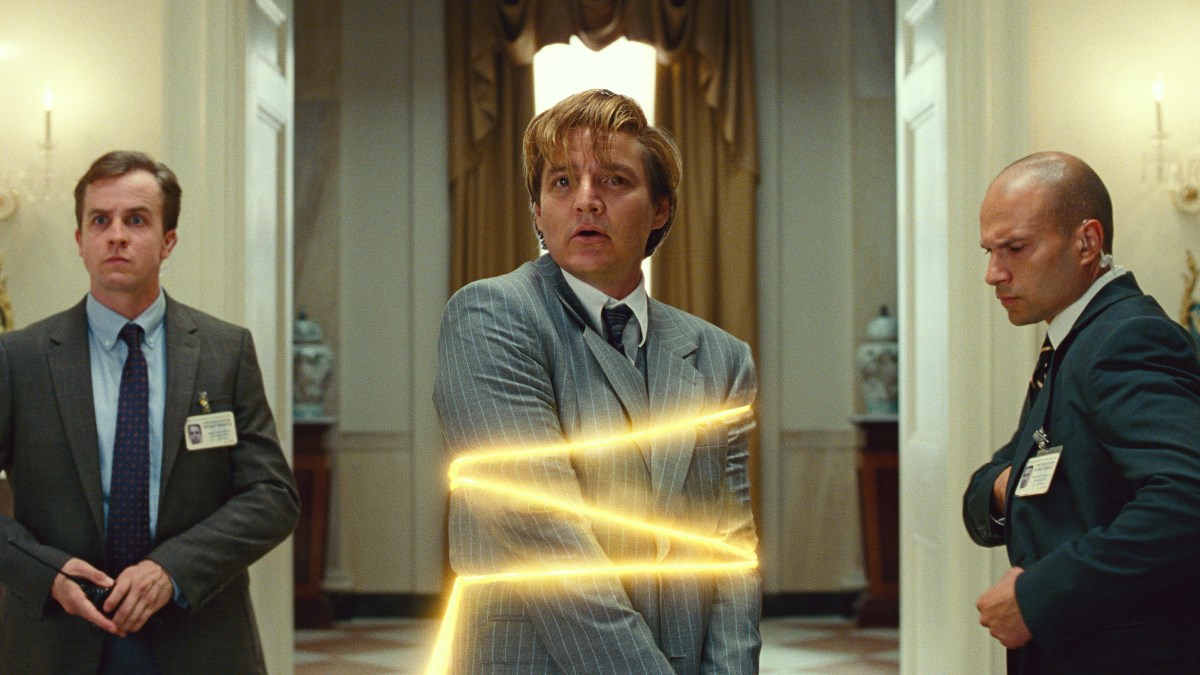 But Diana herself is lost amidst that mess. Wonder Woman 1984 never really engages with Diana’s central conflict (just as it never really engages with the period it’s set in), of the personal sacrifices she makes for the world of men, and how she’s been in stasis for over six decades over a lost love. It doesn’t ever really let us inside the person that she is. Gadot brings a lot to the role — that Wonder Woman 1984 works to the extent it does is largely up to her — as she conveys Wonder Woman’s humanity, effortless charm, grace and power in movement, her face showing the pain she endures and the determination to forever do the right thing. She has made the role so much her own that it’s impossible to imagine anyone else. Gal Gadot is Wonder Woman.

Unfortunately, she’s working within an overburdened package that is unsure of itself. Its action bits are no match for the World War I sequences conjured up for the original. Weirdly, for a movie that cost $200 million, its first big action set piece set in the desert feels small at times. I couldn’t place my finger on the issue, if it was bad CGI, editing, or action choreography. Wonder Woman 1984 is much better off with its comedic and romantic bits. Steve’s return flips the fish out of water concept from the original — Diana knows the world and it’s Steve for whom everything is now foreign.

But the meat and potatoes of the narrative is half-baked or unexplored. And now that Wonder Woman 1984 is simultaneously releasing on HBO Max (albeit in the US only), I can’t help but feel that maybe it should have been a miniseries. Zack Snyder’s Justice League is already getting that treatment. That would give us episodes about how Diana’s doing without her friends who have all died, episodes that allow the villains to be fully developed, and episodes that focus on Diana and Steve’s relationship after his miraculous return. It needs that because it’s trying to fit in so much. That seems odd to say given it’s already 145 minutes long. But it requires a lot more time to tell the stories it desperately tries to fit into a single movie.

Wonder Woman 1984 is out in cinemas across India and elsewhere. In the US, it’s available on HBO Max for a month.